🌨️ The City and County of Broomfield starts plowing operations as soon as the snow starts falling, and continues after it stops. The first priority is to clear major roadways, then secondary roadways to keep the most traveled routes passable through the duration of the storm. Maps of priority routes and additional information can be found on the CCOB Street Maintenance web page. The Colorado Department of Transportation (CDOT) is responsible for state highways such as US 287, 120th Avenue, and others.

Residential streets will be plowed based on the amount of snowfall.

Please note, Broomfield aims to keep the roads passable, and does not perform snow removal services. Thanks for your patience with the resulting drifts on sidewalks and, in some cases, in front of driveways, although crews try to avoid these wherever possible. If you feel you need to report a snow or ice concern, the online form can be found on the CCOB Street Maintenance web page.

🚶🏾 Broomfield trails, such as primary school routes and other high-use sidewalks, are plowed as promptly as reasonably possible when there is one inch of accumulation on concrete surfaces, followed by recreational and less used sidewalks. The parking lots, sidewalks, and entrances leading to all City and County facilities will be cleared during any storm. In the event of an extended storm, concrete trail and parking lot snow and ice control will be completed multiple times throughout the day.

🕔 Be prepared! The best way to stay safe, is to STAY HOME! Make sure you have a 72-hour home kit and a go kit prepared in advance, and consider backup plans for services such as home health care, meals, oxygen, or door-to-door transportation. Learn more about what should be in your Home and Go Kits at Broomfield.org/72hourkit

🏛️ City and County buildings may close, or operate on a delayed schedule, for the community’s safety. Check to see if facilities are open before making a trip to the City and County of Broomfield buildings, which include the library and recreation centers.

🧊 Cold winter temperatures often mean frozen pipes for homeowners, leading to pipes bursting and excessive damage. All it takes is outside temperatures of 20 degrees Fahrenheit or less for pipes to freeze. Protect yourself by preparing your pipes ahead of time and visiting this website for more information on how to protect your pipes from freezing.

How To Prepare For Winter Weather

See these helpful on the Winter Weather Preparedness page on how to prepare for heavy snow, how to stay safe during a storm, and how to conserve energy.

Also, see some helpful tips on winter weather preparation below. 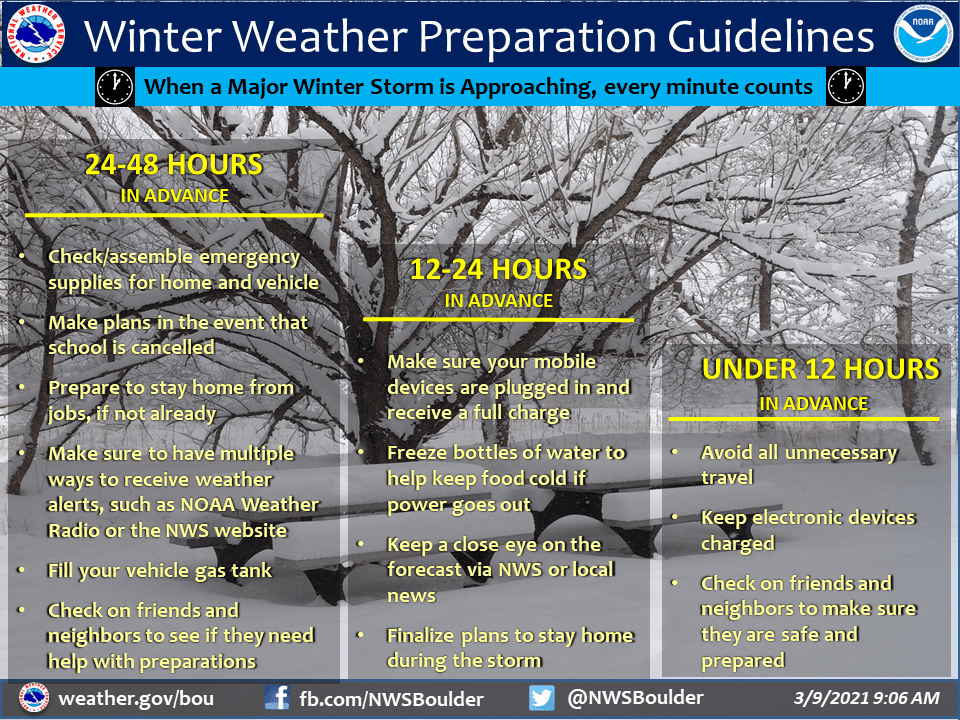