September 8, 2021: On Wednesday, September 8, 2021 at approximately 6:38 a.m. Broomfield Police Officers responded to a report of a hit-and-run involving a truck and trailer on the shoulder of US 36, near the Wadsworth Blvd exit. It was quickly determined that the truck, trailer, and tools inside were reported stolen out of Westminster.

As officers arrived at the scene they spotted the suspect, later identified as James Ortiz (36), running away on foot. Ortiz entered the Harvest Station Apartments at 11775 Wadsworth Boulevard, kicked in a door to one of the apartment homes, and barricaded himself inside. Thankfully, the resident of the apartment was not home at the time.

A CodeRED was immediately sent out to residents of Harvest Station instructing them to shelter-in-place. Officers also began knocking on doors to alert residents of the situation and prepare them to evacuate. The Broomfield SWAT team was called to assist and took custody of Ortiz within 40 minutes. Ortiz threatened officers and resisted arrest. After he was taken into custody he was treated for minor injuries at a nearby hospital and was medically cleared to be booked at the Broomfield Detention Center on charges of 1st Degree Burglary, 1st Degree Motor Vehicle Theft, Theft of $20,000 to $100,000, Criminal Mischief, Resisting Arrest, Obstruction, Possession of a Weapon by a Previous Offender, Felony Menacing, and two counts of Violation of Bond Conditions. A loaded gun was also recovered at the scene.

The Broomfield Police Department would like to thank the community for their cooperation and patience during this incident. If you would like to receive CodeRED emergency alerts in the future and are not yet registered, you can find information on how to sign up at https://www.broomfield.org/2793/Emergency-Alerts.

August 27, 2021: The Broomfield Police Department has arrested one person in connection with Wednesday’s homicide in the Sunridge Neighborhood of Broomfield. Joseph Maestas-Sanchez, 22, was taken into custody on Thursday. He is accused of shooting and killing 71-year-old Broomfield resident Michael Lewis just before 6:30am Wednesday morning.

Investigators allege Mr. Lewis was shot when he attempted to confront the suspect who was attempting to enter unlocked vehicles in the area. Additional details will remain under investigation and are not available for public release at this time.

Maestas-Sanchez is being held at the Broomfield Detention Center, without bond, pending the filing of formal charges by the 17th Judicial District Attorney’s Office.

Detectives continue to investigate this case and have identified additional suspects believed to be responsible for the criminal trespass crimes in the same area. The number of additional suspects, and their names, are being withheld because the investigation into their involvement is ongoing.

This crime has understandably left many residents shaken. Detectives have worked around clock and will continue to do so to bring this case to conclusion.

Anyone who has additional details regarding this investigation who has not already spoken with police can call the tip line at 303-464-5749 or Metro Denver Crime Stoppers: 720-913-7867.

August 26, 2021: The Broomfield Police Department is exhausting all efforts to identify and locate the suspect(s) responsible for yesterday’s deadly shooting in the Sunridge Neighborhood, near Hwy 287 and Miramonte Blvd.

Anyone who has information about this homicide is asked to call our tip line at 303.464.5749 or you can remain anonymous by contacting Metro Denver Crime Stoppers at 720-913-7867.

Officers responded to the area just before 6:30 am Wednesday for reports of a disturbance and shots fired. On scene they found one adult male deceased in the parking lot. That person has been identified by the Adams County Coroner as 71-year-old Broomfield resident Michael Lewis.

At this time investigators believe Mr. Lewis was a resident of the Sunridge Neighborhood and was shot when he interrupted a crime in progress. Additional details of what happened are still under investigation.

The Broomfield Police Department sends its condolences to the family and friends of Mr. Lewis, along with the entire Broomfield Community. We understand this crime has left many residents shaken. Our team of victim advocates has been in touch with the family of Mr. Lewis, and will continue to support them through the investigatory process.

If you see or hear something suspicious in your neighborhood please never hesitate to call 911 or our non-emergency line at 303.438.6400.

August 25, 2021: On Wednesday, August 25, 2021 at approximately 6:30 am Broomfield Police Officers responded to several reports of a disturbance and shots fired in the 2200 block of Sunridge Cir., near Hwy 287 and Miramonte Blvd. Upon arrival officers found a deceased adult male with an apparent gunshot wound.

The name of the deceased will be released by the Adams County Coroner after a positive identification and notification to next-of-kin have been made.

This incident is being investigated as a homicide. Detectives and CSI spent the morning processing evidence and interviewing witnesses to determine what led up to the shooting. No arrests have been made. Several vehicle tresspasses were also reported in the area early Wednesday morning, although it’s unknown if/how they’re connected to the homicide.

Anyone who has information about this homicide is asked to call our tip line at 303.464.5749 or you can remain anonymous by contacting Metro Denver Crime Stoppers at 720.913.7867.

August 9, 2021: The Broomfield Police Department has arrested two people in connection with a robbery and attempted homicide that occurred on Friday, August 6 at the Camden Flatiron Apartments located at 120 Edgeview Drive in Broomfield.

Jeremiah Scott and Pharell Ausby, both 18-years-old, were arrested for Attempted First Degree Murder and Robbery and are being held at the Broomfield Detention Center.

The incident happened just before noon in the parking lot of building four. The suspects are accused of arranging on Facebook Messenger to meet the victim and buy his car. During the meet-up a shot was fired at the victim and his cell phone was taken. Thankfully no one was injured during the attempted robbery of the vehicle. An investigation by Officers and Detectives led to the arrest of both Scott and Ausby.

The BPD encourages everyone who is selling an item online to utilize a “Safe Trade Spot" which are designated locations at law enforcement offices where buyers and sellers can meet in public under surveillance to complete in-person transactions. There’s no charge for the service. The parking lot of the Broomfield Police Department at 7 DesCombes Drive is a designated “Safe Trade Spot.”

IN THE NEWS/PRESS INFORMATION

The Broomfield Police Department routinely utilizes social media to disseminate information to the public. Please go directly to our Facebook and Twitter accounts for the most up-to-date information. You can also follow us on Nextdoor and on YouTube.

The Broomfield Police Department utilizes a team of public information officers. They are responsible for meeting with the press, addressing any inquiries from the media, and serving as the voice of the department.

The on-call public information officer can be reached 24 hours a day, seven days a week through the Communications Center (dispatch) at 303-438-6400. You can also email Lead Public Information Officer Rachel Welte here (does not always respond to email on weekends and holidays). 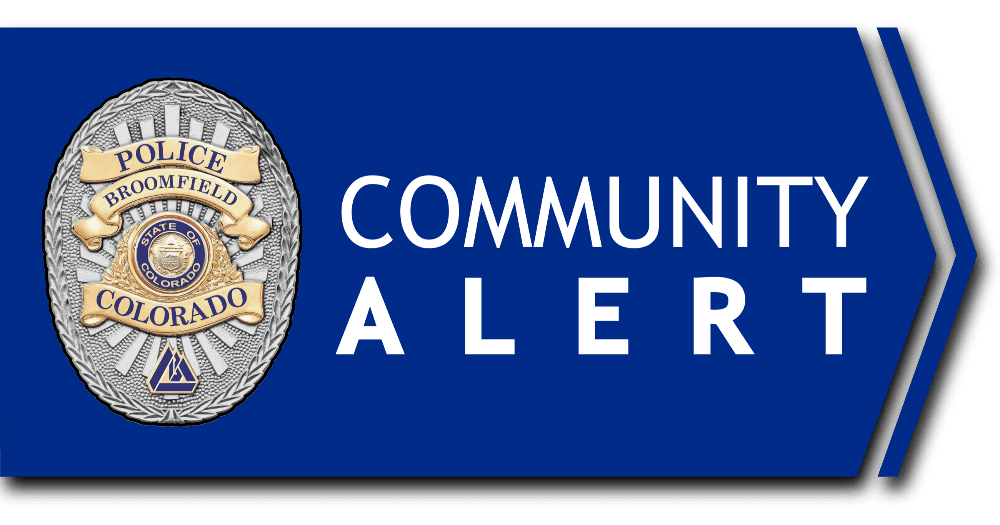 SOCIAL MEDIA POLICY
Comments and photos posted to social media pages will be monitored. The City and County of Broomfield reserves the right to remove posts or block access to individuals contributing any inappropriate or offensive language or material without prior warning or notice. For example, content including the following may be removed by The City and County of Broomfield at its sole discretion: obscene language or sexual content, content that threatens any person or promotes illegal activity, and content that supports or promotes commercial services or products. Content that is not topically related to the account(s) or which links to third party sites or advertisements will be deleted.