The City of Broomfield was founded in its current location in part because of the regional transportation system. Broomfield’s original homes were built along U.S. Highway 287 near the junction of two railroad lines. Broomfield grew significantly after the Boulder Denver Turnpike (now known as U.S. Highway 36) was constructed in the 1950s. The Turnpike’s only interchange and toll booth were located in Broomfield. Equidistant from Denver and Boulder, Broomfield continues to have strong ties to both communities, and Broomfield has emerged as a destination for regional employment and shopping. As in the past, the future health of Broomfield will depend on the quality of the transportation system serving the area. As Broomfield and the Denver metro area continue to experience population and employment growth, traffic and mobility needs will also increase. Regional growth is creating pressure on roadways internal to Broomfield, as well as on the state highway system serving the Broomfield area. Neighboring counties are growing at a fast pace, creating significant traffic impacts on our regional highways.

Broomfield has a strong history of working closely with regional partners including the Colorado Department of Transportation (CDOT), the RTD, the Denver Regional Council of Governments (DRCOG), and the surrounding communities and counties to advance regionally important transportation improvements. The recent reconstruction of U.S. Highway 36 to a state of the art highway, replacement of the Wadsworth Parkway bridge and new Uptown Avenue Bridge, Bus Rapid Transit (BRT), tolled express lanes, and the U.S. 36 Bikeway are prime examples of regional collaboration. Continuing this history of regional partnerships will be critical to meeting the transportation needs of Broomfield. 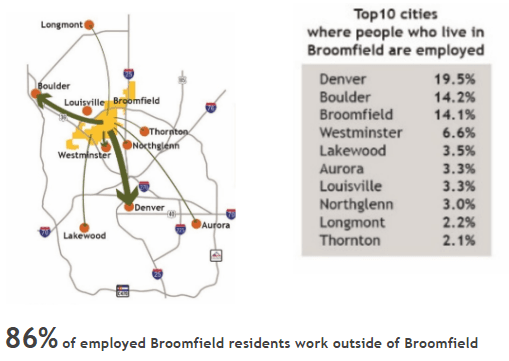 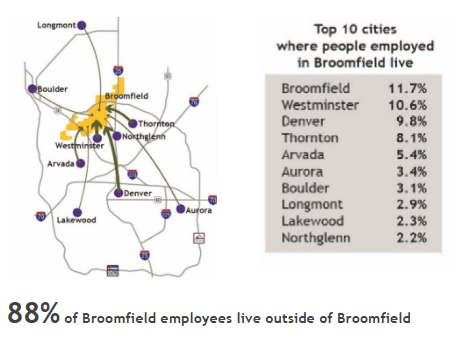