Since the station must remain operational at all times and because of the small footprint of the facility, work is controlled with only a few crew members on site at any time.

The first and second replacement pumps are operational and the third pump is scheduled to go online by the end of October. The oxygen generator has been installed and the crew is working on the piping for the installation. The mechanical (HVAC) building code required upgrades are occurring as allowed due to site constraints.

Construction of the Rock Creek Lift Station Odor Control Project began in March 2020.  The project was originally scheduled to be completed in October will now be completed in November 2020 due to pump start up issues which have been resolved.

The Rock Creek Lift Station is located along Brainard Drive north of Industrial Lane.  The station pumps wastewater from the Interlocken and Flatiron Crossing area toward the wastewater treatment facility located at 124th Avenue and Lowell.

The project will renovate the existing facility bringing the station into state compliance and install an oxygenation system to assist in mitigating odors that have been an issue for the station.  The station’s pumps, electrical system, hvac, controls and SCADA will be renovated.

Sewer lift stations discharge into force mains (i.e., pressurized pipelines), which can have lengthy detention times based on the size and length of pipe. If the detention time is extensive, the wastewater inside the pipe will decompose and go into a septic condition, creating hydrogen sulfide (H2S). When this occurs, the wastewater will release odorous substances and become corrosive to concrete structures and pipelines.

The existing Rock Creek Lift Station, shown in the map, and the 96th Street Force Main and Outfall were constructed between 1998 and 2000 to serve the FlatIron Crossing Mall, MainStreet at FlatIron, FlatIron Marketplace, and properties north of US 36 and east of South 96th Street. 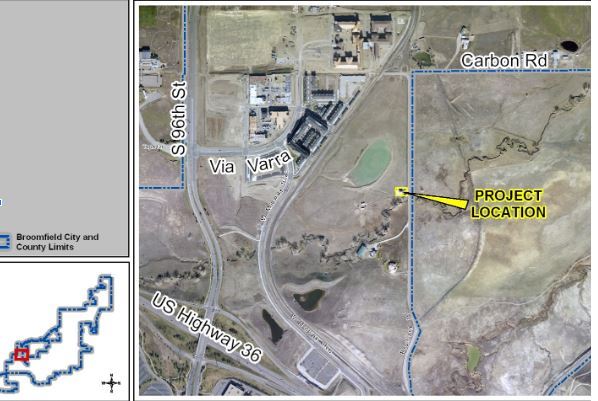 In September 2015, Burns & McDonnell completed an Odor Evaluation Study of the Rock Creek and Great Western Lift Stations. It was determined the odor and the presence of H2S were a result of issues at the Rock Creek Lift Station.

The data collected during the study period, without any treatment at the lift station, showed odor levels exceeding the employee exposure thresholds for H2S but not exceeding the Immediately Dangerous to Life and Health (IDLH) concentration of 100 parts per million (ppm). At a Rock Creek manhole downstream from the lift station, the levels recorded were well above the odor threshold and regularly reached the IDLH Levels.

The data collected in the study with typical chemical treatment showed lower levels; however, levels of H2S continued to regularly exceed the IDLH threshold. The study concluded the chemical treatment currently being used is not effectively managing the H2S generation in the system.

The study reviewed odor control alternatives and proposed installation of an oxygenation system at the Rock Creek Lift Station.

Staff issued a Request for Proposal (RFP) for a design-build firm in December 2015. Design-build is a procurement method by which a single entity is responsible for the entire project. The design and construction work can be overlapped, reducing the time spent on document review, bidding, procurement of long lead time items, and design-related issues. Six firms attended a pre-bid meeting, and two submitted proposals. Staff recommended, and Council approved, a joint venture of BMCI JV – Broomfield Rock Creek for the project in January 2017, for design and development of Guaranteed Maximum Price (GMP) for the Rock Creek Lift Station Odor Control Project in the amount of $50,000.

An amendment with BMCI JV for the Rock Creek Lift Station Odor Control project for GMP for final engineering services and construction, in the amount of $2,441,930 was approved by Council July 10, 2018.