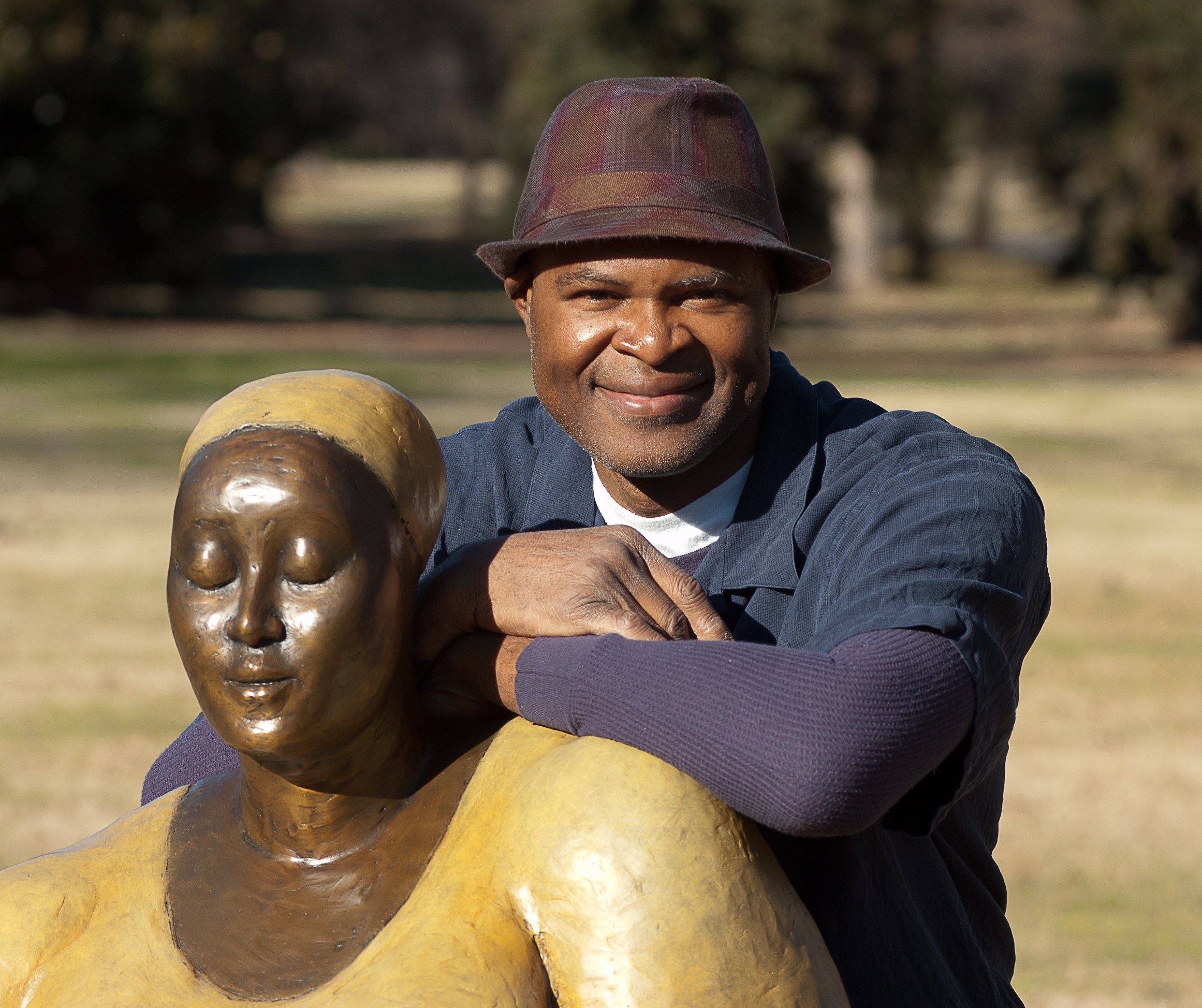 I was born in Eastern Nigeria in 1965. I am the first of three sons. I currently reside in Fayetteville, Georgia with my wife and three children.

As far back as I can remember I have always been drawn to art. Later on I realized that my artistic sensibilities were best expressed in the three dimensional art of sculpture. Around this same time I was introduced to basketball, which suited me well as I am six feet nine inches tall. After obtaining a Degree in painting in Nigeria, basketball became the avenue for me to come to the United States. I was recruited by BYU-Hawaii where I played from 1989-1993, and graduated with a BFA in Sculpture.

Immediately after that, I enrolled in the graduate program at BYU-Provo where I received an MFA degree in sculpture in 1997. While going to school in Provo, I met and married my wife, Deidra, who is from Idaho and graduated in 1996 with a Master of Accountancy.

I now work full time out of my studio in Fayetteville. My work is represented in galleries across the country, and my large scale monumental work can be seen in individual and public sculpture gardens as well.

The forms in my sculpture are simplified and stylized to better express my thoughts and ideas which are embodied in fluid lines and simple shapes. It is a mode of expression that comes naturally to me, and it is straight to the point and devoid of pretension. Stylization also offers a greater avenue for the expression of universal themes and emotions. This allows me to broaden the scope of expression by transcending mere literal representation of the figure, provoking different thoughts and ideas, and giving the viewer an opportunity for introspection and contemplation.

One of the few guidelines that I follow is best exemplified in a statement made by Michelangelo which states: "Measurement should be in the eyes and not in the hands, for while the hand measures; it is the eye that judges." My proportions, therefore, are not based on any rigid principle, but rather are based on a personal ideal of beauty and balance. I want my figures to be more symbolic rather than literal copies of the human form. Thus in sculpture, my figures, instead of being confined to a model, become a symbol of humanity.

I also simplify my shapes to avoid distractions of any extraneous detail, which does not add to the beauty of the whole design. Attitudes, gestures, and overall composition are of primary importance to me. Detail, of course, has its place in sculpture, but I find that my ideal of beauty is more easily attained with simple lines and shapes, which convey my thoughts and ideas unshackled by detail.

Further, the big, rotund forms symbolize abundant life. It is an outward manifestation of a largeness of soul. 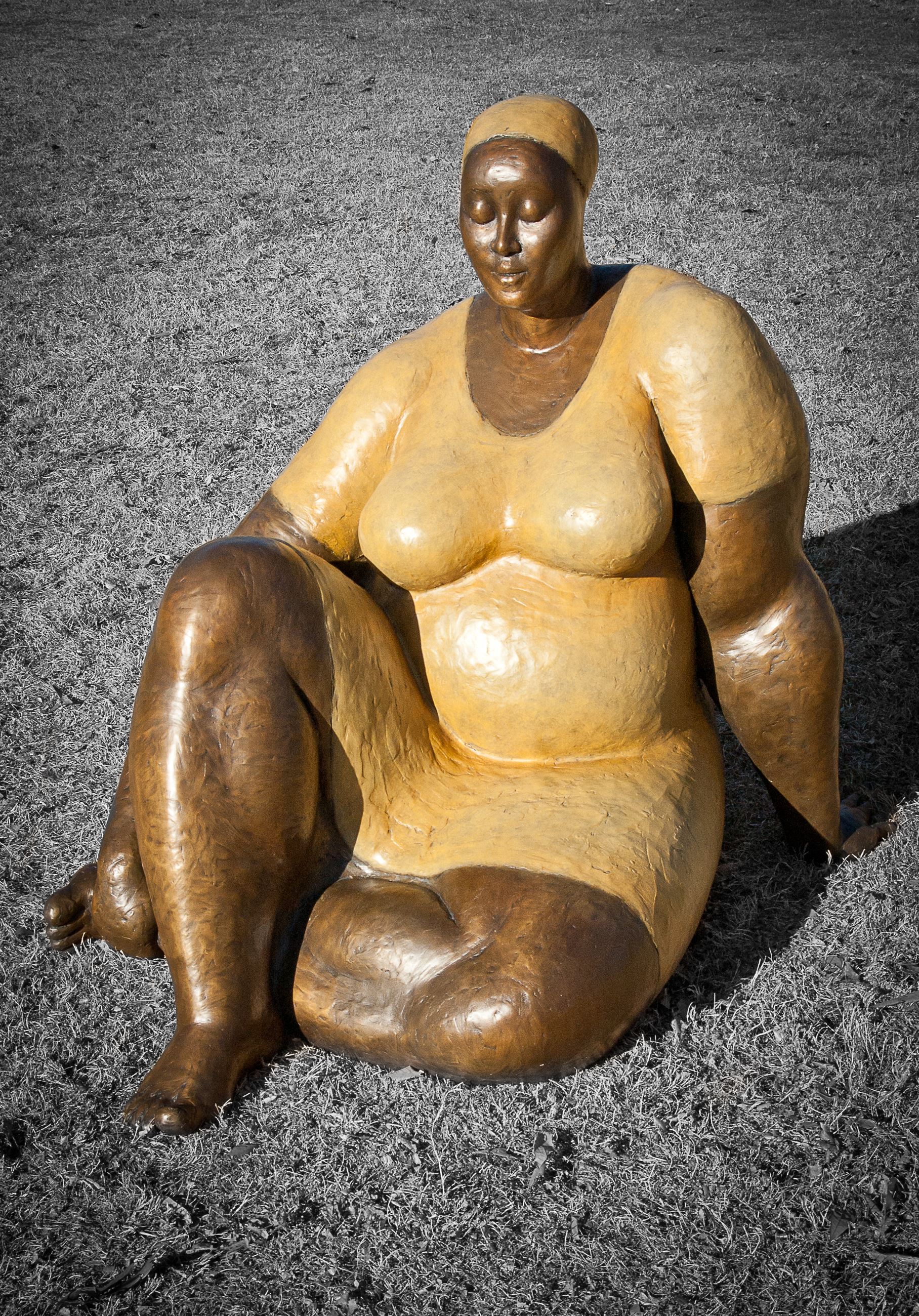 Also prevalent in my sculpture is the theme of womanhood. I am captivated by the noble characteristics which include: empathy, love, resilience, strength, etc., that are embodied in womanhood. The women that are closest to me, my wife and my mother, have influenced me greatly and are exemplars of these noble attributes.

In my indigenous culture as well as in many cultures, womanhood is venerated. There is an understanding that women share, even in a small way, with the creator, the sacred act of giving life. Perhaps this understanding of the dignity of womanhood inspires me to seek to honor women in my sculpture.

I hope all will find in my work a source of inspiration to transcend the turmoil and unevenness of life. I also hope that my sculptures will be capable of eliciting strong emotional responses from the viewer regardless of his or her background or race.

The mission of Broomfield Public Art is to reflect community spirit, enrich conversations, engage community and elevate a sense of belonging.

To achieve our vision and mission we are guided by the following values: